Former American Idol contestant Michael Johns suddenly passed away at age 35, allegedly from a blood clot that formed in his ankle.

On Friday, former American Idol contestant Michael Johns suddenly passed away at age 35, allegedly from a blood clot that formed in his ankle. No official details have been released, but TMZ is reporting that Johns had twisted his ankle and was in enough pain to see a doctor, who released him. He died the following day. How could something so scary happen to someone so young?

While a blood clot that originates deep inside the body—otherwise known as deep-vein thrombosis (DVT)—is fairly rare in young, healthy people, it can occur after you've been sitting for a long time (like on a plane or train) or if a vein is injured from surgery, a broken bone, or other trauma, according to the National Institutes of Health. Other risk factors include obesity, smoking, pregnancy, and taking birth control pills.

These clots can be treated, but they sometimes break off and block blood flow to an artery in the lungs—a potentially fatal condition called pulmonary embolism (PE).

DVT is most common in the thigh and lower leg. While the clots only cause symptoms in about 50% of sufferers, go to the ER right away if you notice your leg is swollen, painful, or tender (especially when standing or walking), or if it's noticeably warm or red in the spot that hurts. Pulmonary embolism, on the other hand, is often marked by shortness of breath, pain while breathing deeply, or coughing up blood.

To avoid both, try to get up and move every 1 to 2 hours if you're seated for long periods At the very least, move your legs and flex your feet to improve blood flow. DVT runs in families, so tell your doctor if it's found in yours—she may prescribe blood thinners or take you off birth control pills, which can raise your clotting risk.

Camille Chatterjee is the Deputy Editor of Health. 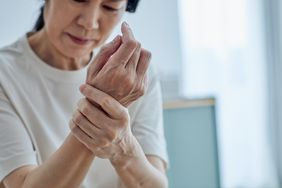