What to Know About Still's Disease, the Potentially Life-Threatening Condition in 'The Big Sick'

This inflammatory disorder can cause serious complications.

The Big Sick is anything but your average rom-com. The movie is based on the real-life love story of comedian Kumail Nanjiani and writer Emily V. Gordon (played by Zoe Karzan), who was put into a medically induced coma just eight months after the couple started dating.

Though doctors didn’t know it at the time, Gordon was suffering from Adult-onset Still’s disease, or AOSD, a rare inflammatory arthritis that affects fewer than 1 in every 100,000 people.

“There’s actually no rhyme or reason why some people get AOSD,” says Apostolos Kontzias, MD, director of the Adult Autoinflammatory Diseases Clinic in the Department of Rheumatology at the Cleveland Clinic. But younger women and people who suffered AOSD's pediatric counterpart—systemic-onset juvenile idiopathic arthritis—are more likely to be affected.

“Typically, patients have daily fevers which aren't due to infection or cancer," explains Dr. Kontzias. Other symptoms include joint pain and chest pain, swelling, rashes, liver and spleen enlargement, and "very high inflammatory markers.” But people with AOSD may not think anything of their symptoms at first.

Take it from Gordon, who wrote in a 2015 Lenny Letter that she initially ignored what she thought was a stubborn cold. But before long, she started to feel tired and weak: “I had to take breaks walking to the train,” she wrote. “Random parts of me hurt.”

When Gordon began to experience difficulty breathing, she went to see a doctor. Tests revealed she was in respiratory distress, and she was rushed to a nearby hospital. Still, Gordon thought it was "nothing,” she wrote.

The next day, doctors put Gordon into a coma as they tried to determine what was ailing her. Gordon remained in the coma for eight days, underwent lung surgery, and was kept in the hospital for nearly a month.

There isn't one test that doctors can use to diagnose AOSD. It's a diagnosis of exclusion, meaning doctors try to rule out all other possibilities first.

“The most fearsome complication associated with AOSD is called macrophage activation syndrome, a life-threatening situation that is observed in about 20% of AOSD patients, and can cause organs like the liver and lungs to shut down,” says Dr. Kontzias. “Blood pressure may flank, potentially requiring life support measures.”

Gordon’s case is proof that AOSD patients can have widely varying experiences with the disease. While Gordon was put in a coma and had to undergo lung surgery, others may have only one episode of Still’s and then never feel symptoms again. Treatment for AOSD typically includes over-the-counter medications like Motrin or Aleve that help soothe chronic arthritis-like symptoms. More severe cases may require corticosteroids, such as prednisone.

One of the best ways to prevent flare-ups of AOSD is to reduce stress, says Dr. Kontzias, and it sounds like Gordon has caught on. In a recent interview with People, the writer said she's learned to give her body time to rest when she feels she needs it: “Over 10 years, I’ve gotten the good sense of how to deal with [the disease],” she said. 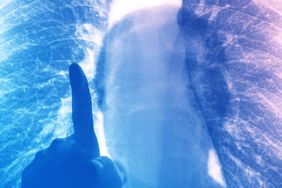