The sheer nastiness of Ronda Rousey's hit got us wondering: what really happens to your body during something like that? So we asked a few experts.

On Saturday, the unthinkable happened: Ronda Rousey finally lost a match. The UFC bantamweight title now belongs to 34-year-old Holly Holm, whose winning kick to Rousey's head sent her previously undefeated opponent straight to the floor—and then the hospital. UFC president Dana White told reporters after the match that Rousey spent the night in the hospital as a precautionary measure; the knockout caused her to lose consciousness, several outlets reported.

Rousey took to Instagram on Monday to assure her fans that she's doing fine—"I'm going to take a little time, but I'll be back," she wrote. Surely, a woman as fierce as her won't be gone from the octagon for too long, but the sheer nastiness of the hit got us wondering: What really happens to your body when it takes such a vicious blow?

So, we asked a few experts. Here's what they had to say.

14 Types of Headaches and How to Treat Them

How hard did Rousey really get hit?

That question's tough to answer—there isn't, say, some kind of meter on the end of Holm's foot. But here's a factoid that might be a good starting estimate: "The force of a professional boxer's fist is equivalent to being hit with a 13-pound bowling ball traveling 20 miles per hour," per the American Association of Neurological Association.

While you'd guess that a ferocious kick to the head might be even more damaging than a solid punch, that might not be true. "In this particular fight, we have to take into account that these are elite athletes," says Cynthia Bir, PhD, director of the Center for Trauma, Violence, and Injury Prevention at the University of Southern California. "Typically when you see things like a roundhouse kick, there’s potential for there to be less force than an [arm] strike because it’s such a technique-driven type of skill."

It's also possible that the brunt of any trauma came after Rousey's fall, rather than the kick itself. "It appears that she got struck by Holly's kick more in the neck region," explains Bir. "I didn’t notice a lot of head motion from that [in the video clip]. But when she hits the mat, her head hits hard, and then she gets several additional ‘ground-and-pound’ hits to the head once she is down."

Does she definitely have a concussion?

Concussions are defined as a temporary loss of normal cognitive function, and so Rousey's TKO definitely qualifies.

But diagnosing concussions is a head-spinning (pun intended) process. For one thing, the simple force it takes to cause a concussion is different for everyone. "We are constantly researching what force thresholds put athletes at the greatest percent risk of a concussion, but that’s not to say that reaching that threshold guarantees [one], or if you don’t reach a certain level of impact that you’re definitely in the clear," Bir explains. "There are so many little nuances that play into it that it’s hard to say with any certainty how one individual will be affected."

Making diagnosis even more difficult, concussion sufferers don't always lose consciousness—symptoms are much more subtle. "If a person feels sort of dazed, confused, out of it, or uses terms like, ‘seeing stars,’ that all falls into the definition of an altered mental state," explains Kristen Dams-O'Connor, PhD, co-director of the Brain Injury Research Center at Mount Sinai Hospital in New York City.

When will Rousey be able to come back?

When it comes to your big comeback, the process is entirely based on the individual (though we imagine Rousey's will be stronger than ever!).

"Perhaps in [Rousey's] case, it’s returning to the gym and just doing cardiovascular training, but nothing that would involve getting hit to her body or head. Then, only if she continued to be asymptomatic at that level of return, she may be recommended to return to full on contact," Dams-O'Connor says. "It should be very individualized; one person is going to recover very differently from another."

Bir adds that official guidelines generally recommend staying completely rested for a full 24 hours—both physically and mentally. "You need to not train and give your body adequate time to heal," she says. "You're basically instructed to not even think too hard."

What are the long-term effects of a knockout?

Again, the long-term effects of a concussion or knockout are different for everyone, says Dams-O'Connor. The majority of people who sustain one head injury notice their symptoms resolve within a few days, in some cases weeks. But, roughly 15% continue to have these symptoms for weeks, or in some cases years after the injury. Symptoms can range from cognitive changes (memory problems, a slower information processing speed, difficulty speaking) to physical changes, like fatigue or headaches.

"It’s really hard to take all of our research and use it to predict what’s going to happen to one individual person, but that is where the research is at right now," Dams-O'Connor says. "Athletes, coaches, and families are having to make really important decisions about their longevity in their sport and their return to the sport if they do sustain a concussion.” 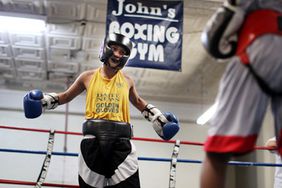