The Internet continues to buzz over the Australian woman hospitalized for four days due to her too-skinny jeans. Here's a reality check.

The Internet continues to buzz over the Australian woman hospitalized for four days due to her too-skinny jeans. Now perhaps the world's most famous fashion victim, the 35-year-old had been helping a family member move "which involved many hours of squatting while emptying cupboards," as per the case study reported in the Journal of Neurology, Neurosurgery & Psychiatry. By later that day, her feet felt numb and swollen and walking became difficult until finally, she fell and couldn't get up. Once she got to the hospital, her jeans were cut off and it was revealed that nerve constriction caused by squatting in them had restricted blood supply, leading to various complications.

We have yet to see the woman's name surface, which makes sense, especially if she has a job ("Sorry, boss, I had to be out of work because of my skinny jeans.") As to whether the story has resulted in any lasting mental trauma to the skinny-jeans-wearing population remains to be seen. But the truth is, in the words of Franklin Delano Roosevelt (a sensible man who likely never owned a pair of skinny jeans), "The only thing we have to fear is fear itself."

Reality check No. 1: "What happened to this woman is incredibly rare," notes Health's contributing medical editor Roshini Rajapaksa, M.D., aka Dr. Raj. "It's extremely unlikely for anyone to incur muscle or nerve damage from skinny jeans. Most people aren't doing a whole lot of leg squats in them."

Skinny Jeans Too Tight? Here's How to Tell

Reality check No. 2: "While these pants in general tend to be tight," continues Dr. Raj, "hers were probably quite constrictive on the skinny-jeans spectrum." You actually don't need an M.D. degree to assess that; if you experience trouble moving around (or breathing) in any pair of pants, they are too tight and furthermore, could result in the unfortunate condition known as "muffin top." Although no medical journal has reported anyone being hospitalized for that.

Reality check No. 3: This is why yoga pants exist.

Sure, you can pop a squat next time you purchase a pair of skinny jeans just to be extra-sure they won't do you any harm and/or make you the butt of an international joke (so to speak). But just remember this common-sense advice: "Skinny jeans are meant for fashion, not extreme activity," says Dr. Raj. You know, in case you were planning to run a marathon in them.

12 Weight-Loss Secrets From Celebrity Chefs
Was this page helpful? 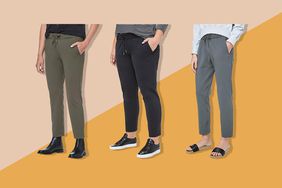 You'd Never Guess That These Chic Office Pants Are From Lululemon