Yes, chronic fatigue is a real, physical, and severe disorder, causing symptoms from exhaustion and memory problems to dizziness and pain.

Chronic fatigue syndrome, also known as myalgic encephalomyelitis (ME), is a severe and long-term illness that affects many body systems, according to the Centers for Disease Control and Prevention (CDC).

As the name suggests, it's an exhausting illness: People with chronic fatigue suffer an unexplained and extreme feeling of tiredness that can last for many months and often years.

Previously, widespread misconceptions, primarily that the disorder is psychological or imagined, existed—even among healthcare providers.

But in 2015, the National Academies of Sciences, Engineering, and Medicine (NASEM), put that notion to rest by defining chronic fatigue in a report as a legitimate disease with apparent physical symptoms.

In its 2015 report, the NASEM estimated that as many as 2.5 million people in the United States have chronic fatigue syndrome. However, approximately 84% of people with symptoms live undiagnosed at that time, possibly due to a poor understanding of the condition.

So, here are the seven most common symptoms of chronic fatigue syndrome that you should know.

"The likelihood is that it's a genetic predisposition [plus] a particular trigger," said Christopher Snell, PhD, member of the Workwell Foundation and former chair of the Chronic Fatigue Syndrome Advisory Committee (CFSAC).

The exact cause of chronic fatigue syndrome remains a mystery—and there could very well be multiple causes, according to the CDC.

Key findings from the CDC suggest that infection with the Epstein-Barr virus (EPV) and possibly other viruses may trigger some disease cases.

Scientists have investigated other possible causes, including immune system problems and hormonal imbalances. But there haven't been any definitive findings to date.

Who Is at Risk of Chronic Fatigue Syndrome?

According to the CDC, chronic fatigue syndrome affects people of any sex, ethnic, and economic background. Women, however, are four times more likely to be diagnosed with the syndrome than men.

The illness can strike at any age, even during childhood, and is most common among people between 40 and 60.

Furthermore, sometimes cases of chronic fatigue syndrome are seen among family members, suggesting that the condition is possibly inheritable. In other words, some people may be more genetically predisposed to developing the condition than others, according to one study published in 2020 in Human Molecular Genetics.

How Is Chronic Fatigue Diagnosed?

There's no lab test or biomarker for chronic fatigue syndrome, and its symptoms overlap with many other illnesses, making diagnosing the disorder challenging.

"[Chronic fatigue syndrome] looks like a lot of other things," said Dr. Snell. And the fact that it's a complex disorder with diverse symptoms throughout the body complicates matters further.

"Most physicians are not trained in medical school to look at more than eight or 10 symptoms without thinking psychiatric disorder," added Dr. Keller. "They don't know what to do with it, and if they can't put a label on it, it creates problems."

According to the authors of the 2015 NASEM report, less than half of medical textbooks include information on chronic fatigue, and fewer than a third of medical schools cover it in their curricula.

To diagnose the disease, according to the CDC, a healthcare provider must ask about the patient's and their family's medical history, do a thorough physical and mental status exam, and order blood, urine, or other lab tests. They must rule out other fatigue-causing disorders and identify the telltale signs and symptoms of chronic fatigue.

The type of exhaustion chronic fatigue causes is not the same weariness you may experience after a taxing week. Instead, the profound fatigue leads to a sharp reduction in your ability to function daily, lasting for six months or more.

The tiredness isn't brought on by excessive activity (say, moving to a new city or training for a marathon) but by everyday, manageable activities.

"Even sitting for a long period of time in an uncomfortable position could generate symptoms," said Dr. Snell.

The tiredness is unrelenting and does not go away with rest. The 2015 NASEM report found that at least one-quarter of people with chronic fatigue syndrome become home-or bed-bound at some point.

You Feel Even Worse When You Push Your Limits

The technical term is post-exertional malaise. It means that your symptoms flare when you put more physical, mental, or emotional stress on your body than it can handle. And it may take a whole day or longer to recover.

"[A patient's] lymph nodes might swell up," said Dr. Keller, "or they might have joint pain or pain in other areas."

According to the CDC, it's important that people with chronic fatigue syndrome accurately determine their stress limits so as not to overexert themselves.

You Often Wake Up Tired

People with chronic fatigue syndrome can log 12 hours in bed, "but when they get up, they feel like they haven't slept at all," said Dr. Keller. The 2015 NASEM report dubbed the phenomenon "unrefreshing sleep."

According to the CDC, most people with chronic fatigue syndrome develop a sleep problem that they didn't have before. The common complaints—including insomnia and frequent awakening—can leave people depleted in the morning rather than restored.

That's why conserving their energy is crucial for people with chronic fatigue syndrome, according to Dr. Keller.

"The patients who are functioning best tend to be those who learn to manage their available energy," explained Dr. Keller. "They're probably managing their symptoms better because they're living at a much lower intensity of effort."

Some people with chronic fatigue syndrome experience some "cognitive impairment," according to the 2015 NASEM report.

According to Dr. Keller, people with chronic fatigue syndrome may also have blips in their short-term memory. Those problems with mental processes—which may also include difficulty paying attention, problem-solving, and planning—can make holding down a job or interacting in social situations challenging. And the issues get worse when you're stressed or overexerted. Unsurprisingly, they can lead to feelings of isolation and hopelessness.

You Get Lightheaded Just From Standing

For many people with chronic fatigue syndrome, standing upright—in the shower, for example, or while doing dishes—can lead to feelings of dizziness and lightheadedness, and possibly fainting. The symptoms get better when the person lies down or elevates their feet but don't necessarily disappear.

The phenomenon is what doctors call "orthostatic intolerance." It's linked to chronic fatigue's effect on the autonomic nervous system, said Dr. Keller, which is "the part of the nervous system that controls everything that's automatic in our bodies, "including circulation.

You Get Headaches or Joint and Muscle Pain

Pain is a common symptom of chronic fatigue—but it can come in many forms, from headaches to joint and muscle pain. According to the 2015 NASEM report, it also differs in intensity from one person to the next.

You Have Other Symptoms, Too

"I would say, more often than not, people have gastrointestinal issues," said Dr. Snell.

Per the CDC, other common symptoms of chronic fatigue syndrome include:

There is no cure for chronic fatigue syndrome. However, patients can treat its symptoms with various drugs and therapies—from sleep aids and pain relievers to gentle exercise and counseling, according to the CDC.

"We see people that are managing their lives reasonably well," said Dr. Snell However, early diagnosis and treatment may be crucial to recovery.

"I suspect the longer you've had the illness, the more effect it's had on your system," explained Dr. Snell.

Talk to your healthcare provider if you recognize the signs of chronic fatigue in yourself—especially the severe exhaustion, post-exertional malaise, and unrefreshing sleep. If you have the condition, the sooner you're diagnosed, the sooner you can get the treatment you need to feel better. 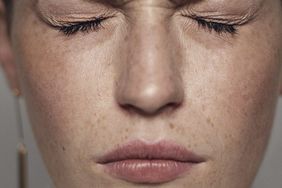