Some herbal supplements can cause problems when taken with certain medications.

Health.com Editorial Team
Health.com Editorial Team
The editors at Health are a dedicated team of experienced health editors, writers, and other media professionals who strive to bring trustworthy and responsible health and medical content to their readers. As a team, we have decades of experience in health journalism and have worked at legacy publishers and some of the biggest news and media companies in the U.S.
health's editorial guidelines
Medically reviewed by
Arno Kroner, DAOM, LAc

Some herbs you may be taking for your heart may be putting you at risk for cardiovascular problems if you already take prescribed medication.

Millions of Americans take herbal remedies for reasons ranging from high cholesterol to depression. Although they're widely viewed as safe, some of these products can cause serious interactions in people taking prescription drugs for cardiovascular problems.

The U.S. Food and Drug Administration (FDA) doesn't regulate dietary supplements (like herbs) with the same rigor as drugs and pharmaceuticals. That means the ingredients in supplements haven't necessarily been proven effective, and standard doses haven't been established. That can add to the risk of drug interactions.

With that in mind, here are some common herbal supplements you should avoid if you're taking certain meds. Much of the following information comes from the National Center for Complementary and Integrative Health (NCCIH).

Garlic is a member of the onion family, available commercially as an oil, extract, or pill (in addition to its natural state). According to the NCCIH, garlic is typically marketed as a way to lower total and LDL (bad) cholesterol as well as blood pressure.

Garlic's blood-thinning properties may increase the risk of bleeding associated with aspirin and warfarin—a blood-thinning drug commonly prescribed to people with heart-rhythm disorders and who have had heart attacks or heart-valve replacements.

The fruit of the palmetto tree (a type of palm tree), saw palmetto is usually available as a capsule, liquid, or tea. It's mostly used to fight urinary problems caused by an enlarged prostate gland.

Like garlic, saw palmetto also increases the risk of bleeding associated with warfarin and must be used with caution alongside nonsteroidal anti-inflammatory drugs (NSAIDs) or during surgical procedures.

If you are scheduled for surgery, consider putting a hold on using saw palmetto (and garlic) in the two weeks before your procedure.

The extract of ginkgo leaves is mainly used to improve memory and prevent dementia (including Alzheimer's disease). Per the NCCIH, people have used it to treat asthma, ringing in the ears, sexual dysfunction, and leg pain caused by poor circulation.

According to a March 2017 study in the Journal of the American College of Cardiology, ginkgo also increases the risk of bleeding associated with aspirin and warfarin.

St. John's wort is a yellow-flowered plant, Hypericum perforatum, sold as a capsule, tea, or liquid extract. People usually use it to treat mild to moderate depression and anxiety and as a sedative for sleep disorders.

According to the American Heart Association (AHA), St. John's wort can "reduce the concentration of medications in the blood." In other words, it can make medications for heart failure (such as Lanoxin) or lowering cholesterol (such as Mevacor and Altocor) less effective.

If you are taking statins or warfarin, it's best to avoid St. John's wort altogether.

The purposes for consuming green tea (from leaves of the Camellia sinensis plant) as a beverage, capsule or extract include losing weight, improving mental alertness, lowering cholesterol, and preventing cancer.

Green tea may interfere with adenosine, a medication for irregular heart rhythms.

This tea also contains vitamin K, "which can reduce the effectiveness of anticoagulant medications, such as warfarin," per the Journal of the American College of Cardiology study. Further, the caffeine in green tea also could interfere with beta-blockers.

The ground, dried leaves of alfalfa are sold as capsules. People often take capsules to lower total and LDL cholesterol and reduce plaque buildup due to atherosclerosis (a hardening of the arteries).

Like green tea, alfalfa contains vitamin K. Because vitamin K helps blood clot, "alfalfa might decrease the effects of warfarin," according to MedlinePlus.

Ginger has been used for centuries to treat various stomach ailments (such as nausea, diarrhea, and stomachache). It is also used to treat joint and muscle pain.

Ginger might interfere with blood clotting or increased bleeding for those taking warfarin, although more research is needed on this.

To be safe, speak to your healthcare provider if you're taking ginger supplements as well as warfarin or aspirin.

Bilberry may improve blood circulation. However, speak to your healthcare provider before taking it along with blood thinners as it could lead to excessive bleeding.

An herb native to Asia, ginseng has been used in traditional medicine for centuries and is now sold as a capsule. Ginseng is often used to boost energy, stamina, and the immune system as well as to lower LDL cholesterol and blood pressure.

When overused, ginseng can diminish the effect of warfarin, according to the AHA—while also enhancing the bleeding effects of aspirin, NSAIDs, and heparin.

It can also interact with other heart medications, such as calcium channel blockers.

People might turn to grapefruit juice to speed up weight loss and improve heart health.

However, the FDA has stated that grapefruit juice interferes with an enzyme essential for properly absorbing medications. That can intensify the effects of cholesterol-lowering statins such as Lipitor and Zocor or high blood pressure medications.

In addition to its familiar use as a lotion and salve, many use aloe orally to treat serious health conditions, including arthritis, epilepsy, diabetes, and asthma.

However, aloe vera can cause a drop in the blood's potassium level, leading to heart rhythm problems.

Further, aloe has the "potential to increase bleeding if antiplatelet analgesic drugs, such as aspirin and NSAIDs, are used simultaneously," per the EPMA Journal study published in January 2019.

Black cohosh, sold as a capsule, is mainly used to assuage the symptoms of menopause (hot flashes, vaginal dryness, night sweats), but it has also been used to treat joint and muscle pain.

Ultimately, black cohosh may interfere with certain prescription medications, including cholesterol-lowering statins, according to the NCCIH.

The fruit of the hawthorn shrub can treat the symptoms of heart disease and lower cholesterol. The leaf and flower are also used to protect from heart failure.

Hawthorn may interact negatively with prescription heart-failure medications. The NCCIH recommended talking to a healthcare provider about using hawthorn before incorporating it into your diet.

People usually take the dried extract of the root of the licorice plant as a capsule. Licorice root treats ulcers, other stomach ailments, bronchitis, sore throat, and viral infections.

"The effects of licorice on potassium and blood pressure are a particular concern for people with hypertension (high blood pressure) or heart or kidney disease," according to NCCIH.

While herbal supplements can offer several health benefits, they can also be harmful to people with some medical conditions and people who are taking certain medications. And because supplements are not regulated by the FDA, they may not work or they may contain something different than what is on the label.

That's why choosing reliable sources for supplements is so important.

Supplements can interact with medications and cause unintended effects. If you're considering adding herbs or herbal supplements to your diet, it's always best to consult a healthcare professional for guidance. 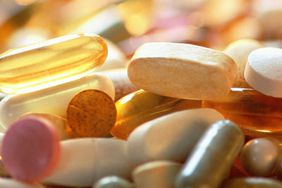