A lump she found in the months before her wedding was malignant, and doctors told her she had a 50/50 chance of survival.

For many engaged couples, pre-wedding stress comes from unexpected costs and stubborn in-laws. But when Baton Rouge-based attorney Holly Hollis and her fiancé, Mark Stars, began to plan their nuptials, they were hit with a setback that blew away those other trivial problems.

In May 2018, six months before their big day, Hollis, 34, was diagnosed with stage four, triple negative breast cancer—a particularly aggressive and hard-to-treat form of the disease.

"I went for my annual checkup and my doctor felt a lump, so my doctor sent me to get a mammogram," Hollis tells Health. "They scanned it and I could just tell in that moment. The doctors all got really uneasy, and one of them even had tears in her eyes."

Her doctors told her that she had 50/50 odds of surviving more than a year, but Hollis was determined to have her dream wedding. She sought out a doctor who specialized in triple negative breast cancer, and she started an aggressive treatment plan undergoing five types of chemotherapy at once. But after a week of the intense chemo combination, she realized that following through on her wedding plans while sick wouldn't be possible.

"I asked to do the highest level of treatment because I just wanted to knock it out as fast as I could. I mean, I was on the Long Island iced tea of chemo," Hollis says. "But after a few treatments, I started getting so sick that I realized I was going to have to take a slower, more spread out treatment plan."

Because a spread-out treatment regimen would interfere with her original wedding date, the couple decided that they would forego that plan and pull together a last-minute wedding. With the help of a fast-acting dressmaker and generous vendors, Hollis and Stars were able to tie the knot in a ceremony in New Orleans on June 18, 2018.

Her makeshift wedding turned out perfect, but her battle with cancer was far from over. In the eight months following her nuptials, Hollis underwent 17 chemotherapy treatments.

"My doctor introduced me to these things called cold caps, which helped narrow the blood vessels to the hair follicles on my head, so I was able to keep most of my hair despite the intensive treatments," Hollis says.

Hollis says that her family and friends regularly came to support her during her chemo treatments, and they wore cold caps with her in solidarity.

In January 2019, she had a double mastectomy and surgery to remove a golf ball-size tumor in her chest that was still cancerous even after eight months of chemo.

When her scans came back after the surgery, she was told there was no evidence of cancer, and she was considered cancer-free. Because the risk of reoccurrence of triple negative breast cancer is high in the first three years after diagnosis, she goes for regular checkups for any signs of the disease.

Hollis wanted to share her experience with anyone else facing cancer, so she created a blog, The Stars Align, to document her experiences with chemo, surgery, and radiation, and to provide resources for others.

She also shared her story on TikTok on May 25, to share her journey with family and friends and see the progress she's made. The 30-second video includes a handful of clips from her wedding, chemo treatments, and recovery, and it shows how far she's come.

When her video received over 468,000 views in one week, she was shocked. "I didn't realize the video would take off as much as it did, but I love the thought that it's bringing hope to anyone else in a similar situation," she says.

While her diagnosis and treatment were traumatic, Hollis realizes that cancer actually allowed her to have experiences with family and friends she never would have had otherwise. "It was so incredibly painful and I wouldn't wish this experience on anyone, but in a way, it was such a positive experience because of how much love and support I received from my family and friends," says Hollis. 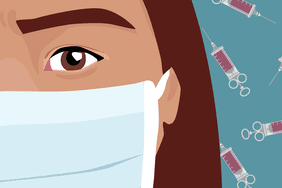