Can This Unexpected Drug Protect Against Breast Cancer?

The results of lab tests may offer hope for women with BRCA1 mutations.

Can a drug that already exists "block" breast cancer from developing in certain women? A study involving lab tests on mice and breast tissue suggest an osteoporosis medication may be a possible preventive measure for women who are considered high-risk for the disease.

For the study, published this week in the journal Nature Medicine, scientists at the Walter and Eliza Hall Institute of Medical Research in Australia analyzed 57 samples of breast tissue. Twenty-four had mutations in the BRCA1 gene, which increases a woman's odds of developing breast and ovarian cancers. (In 2014, Angelina Jolie had a preventative double mastectomy and went on to have her ovaries removed after she learned she carried a BRCA1 mutation.)

As CNN reports, the researchers discovered that a group of cells in the BRCA1 tissue that seemed more likely to become cancerous carried a protein called RANK. In an effort to suppress RANK, the researchers injected the tissue samples with a drug called denosumab that's used to treat osteoperosis as well as cancer-related bone loss.

They conducted separate experiments with mice bred to develop breast cancer. What they found: Denosumab delayed and prevented tumor growth in the tissue samples and the mice.

The results seem promising, but the research is at a very early stage. These findings must be replicated in women in large clinical trials, which could take many years.

For now, the researchers are hopeful. "It would be great if this strategy could 'buy time' for women considering having mastectomies," co-author Jane Visvader told CNN. 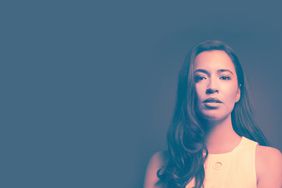