Leukemia symptoms aren’t always noticeable, but knowing what to look for can help you catch the disease early and get treated right away.

Leukemia symptoms aren't always obvious, compared with other health concerns. If you develop a sinus infection, pain and pressure in your face will likely clue you in. If you're running to the bathroom and it's painful to go, you can probably guess that you have a urinary tract infection (UTI).

But people rarely experience any noticeable symptoms of leukemia—or the "warning signs" are vague and easily attributable to other problems. Take fatigue, for example. This common leukemia symptom can easily be chalked up to a busy schedule or stress. The same goes for other signs and symptoms of leukemia, like night sweats or a tendency to bruise easily. All of these vague symptoms can ultimately make this type of cancer difficult to diagnose.

Still, paying attention to how your body feels and to new changes you're experiencing could help you spot a disease in its earliest stages and get treatment ASAP. Here are some leukemia symptoms that you should get checked out by a doctor.

What Are the Symptoms of Leukemia?

The exact symptoms of leukemia can vary depending on which type a person has. According to the Mayo Clinic, some of the more common leukemia symptoms in adults may include:

With that said, you may not experience all symptoms of leukemia, and those you do notice can often be easily blamed on something else. That's especially true when it comes to chronic leukemia, which is the slow, less aggressive form of the disease, Jeffrey Schriber, MD, director of Hematologic Malignancies at Cancer Treatment Centers of America in Phoenix, tells Health.

"Some people will go for a wellness check or something like knee surgery, and when they have bloodwork done their white count is ridiculously high," says Dr. Schriber. "When someone who feels well presents like that and ends up having leukemia [after confirmation with a bone marrow test], it's likely going to be chronic leukemia. It kind of rumbles along." Such a person wouldn't even know that they had leukemia had it not been for that routine (or pre-op) blood test.

Acute leukemia symptoms, on the other hand, tend to be more recognizable (though there are exceptions). That's because this type of leukemia can come on suddenly, sometimes within days or weeks, according to the University of California San Francisco Health. The abrupt changes can act as a red flag that something's wrong.

Regardless of type, catching the disease in its earliest stages can help boost the chances of successful treatment, so it's always a good idea to get checked out by a doctor if you have any concerning symptoms.

The More Urgent Leukemia Symptoms and Why They Occur

First and foremost, it's important to clarify that any concerning symptoms warrant a trip to the doctor. But here's a closer look—with input from doctors—on some of the more specific signs and symptoms most commonly associated with leukemia, and why they occur with this type of cancer.

You Bruise or Bleed Easily

What's more, this overproduction means there's less room for red blood cells (which carry oxygen throughout your body) and platelets (which help blood clot). That's why bleeding or bruising easily can be a common leukemia symptom.

Overall, this tendency to bleed or bruise easily with leukemia is "related to the blood not working well," Felipe Samaniego, MD, professor in the Department of Lymphoma/Myeloma, Division of Cancer Medicine at The University of Texas MD Anderson Cancer Center tells Health.

You're Always Getting Sick

This leukemia symptom happens as a result of the lack of healthy, normal white blood cells, according to the ACS. So that means your immunity is suppressed, even though your white count might appear high on a blood test. As a result, it's much easier to catch viruses and bacterial infections that you might otherwise have been able to dodge.

Serious fatigue can be one of the early symptoms of leukemia. The abundance of white blood cells and the shortage of red ones means you may not be getting enough oxygen. With certain forms of leukemia, the large number of white blood cells can also make the blood thicker, the American Cancer Society says, which means it's harder for blood to flow through the small vessels in the brain. Either problem can leave you feeling wiped.

Your Lymph Nodes Are Swollen

While leukemia is thought of mainly as blood cancer, it also affects your lymphatic system, an important part of your immune system that helps filter your blood and protect your body against foreign invaders. If your blood is rife with cancer cells, those cells can build up in the lymph nodes in your neck, under your arm, and in your groin. One or more of these nodes might appear swollen but probably won't hurt.

You're Often Cold, Pale, and Short of Breath

Having low red blood cells from leukemia counts results in a condition called anemia, per the ACS. This can cause a person's skin to look paler than usual, shortness of breath, and feeling cold, which are leukemia symptoms in adults and kids.

The signs and symptoms of leukemia can also include bone or joint pain, especially if the cancer has advanced. The pain is a result of there being too many cancer cells in your bone marrow, according to the University of Pittsburgh Medical Center's Children's Hospital (UPMC).

You're Having Trouble Breathing

If you can't breathe, no matter the cause, call 911. While shortness of breath can be caused by many things (asthma, heart attack, etc.), it's also a potential leukemia symptom because cancer cells may cluster in the middle of the chest near the thymus gland that makes white blood cells, per the UPMC. That can make it harder or painful to breathe. You might also wheeze or cough more than usual.

You Get Unexplained Fevers or Night Sweats

Healthy people don't get fevers unless they're fighting off an infection. Random fevers, on the other hand, can be a symptom of leukemia. That's because cancer cells produce fever-inducing substances called pyrogens, according to the Roswell Park Comprehensive Cancer Center. The disruption to your normal body temperature might also cause you to experience another leukemia symptom: night sweats, or significant sweating during sleep.

You Have a Weird Rash

Skin leukemia symptoms are usually more obvious than other signs of the disease, but they also tend to be less common. Some people with leukemia develop what's known as a "leukemia rash." It most often crops up on sun-exposed parts of the body and can feature small purple, red, or brown spots. No one knows exactly why it happens, but once you treat the cancer the rash goes away, says Dr. Samaniego.

You're Often Nauseated and Feel Full Quickly When Eating

This leukemia symptom is most apt to occur with one particular type called hairy cell leukemia. "Patients get a gigantic spleen, sometimes along with other gastrointestinal symptoms like nausea, feeling full easier, and constipation or diarrhea," says Dr. Schriber. He explains that the spleen is essentially a giant lymph node, and this type of cancer tends to build up there. "You can feel a big mass in the abdomen," which is where the spleen is located, he says.

What To Do if You Have Leukemia Symptoms

First, it's important to remember that the symptoms listed above are quite general and can be associated with a plethora of other conditions. According to the Cleveland Clinic, only about 14 people out of every 100,000 are diagnosed with leukemia in the US, and conditions like arthritis (which causes joint pain), iron-deficiency anemia, and asthma are far more common.

Still, don't ignore your concerns. Start by getting any leukemia symptoms you're experiencing checked out by your primary care doctor, and if they have reason to believe you might have cancer, you'll be referred to an oncologist who can guide you through the diagnosis and treatment process. 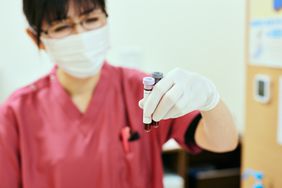 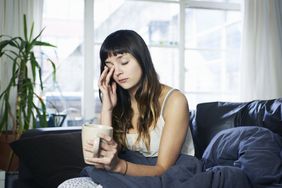 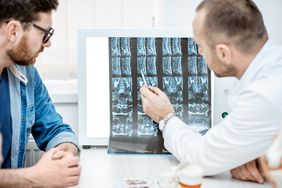 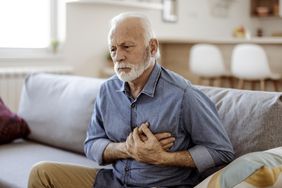