Phexxi is an easy-to-use vaginal gel contraceptive. Available by prescription, Phexxi does not work as well as other birth control methods but can boost the effectiveness of contraceptives.

Korin Miller
Korin Miller is a freelance writer specializing in general wellness, sexual health and relationships, shopping, and lifestyle trends, with work appearing in Women’s Health, Self, Prevention, Forbes, Daily Beast, and more. As a health journalist, Korin has reported heavily on everything from COVID-19 to mental health, with a little of everything in between.
health's editorial guidelines
Medically reviewed by
Renita White, MD

Phexxi is a non-hormonal contraceptive gel inserted into the vagina before sex. Available only by prescription, Phexxi was first approved by the US Food and Drug Administration (FDA) in September 2020.

A unique type of birth control that does not affect hormone levels, Phexxi vaginal gel contains lactic acid, citric acid, and potassium bitartrate. It works to prevent pregnancy by lowering vaginal pH and reducing sperm motility, the Highlights of Prescribing Information filed with the FDA explained.

Ongoing research suggests Phexxi may also offer some protection against common sexually transmitted infections (STIs). However, as of September 2022, it was not FDA-approved for this use. Phexxi manufacturer Evofem Biosciences reported in the fall of 2022 that it was on track to apply for regulatory approval of Phexxi for the prevention of some STIs by mid-2023.

Phexxi is different from other forms of birth control. Read on to learn how Phexxi works, how to use it, and its potential side effects.

How Does Phexxi Work?

Phexxi works to prevent pregnancy by altering the pH of your vagina to make it more acidic and less hospitable to sperm. As a result, it's less likely that sperm will actually make it to your egg to cause a pregnancy.

"Sperm thrive in an alkaline environment," women's health expert Jennifer Wider, MD, told Health. "If the pH of the vagina is too acidic, the sperm will not be able to swim well or potentially die off."

Phexxi may also help to prevent certain STIs. For example, preliminary clinical trial data published in August 2021 in the American Journal of Obstetrics and Gynecology found that Phexxi cut the risks of chlamydia and gonorrhea in half. However, the FDA had not yet approved this use as of September 2022.

How To Use Phexxi

Phexxi can be used on its own or in tandem with other forms of birth control, including condoms, diaphragms, spermicide, intrauterine devices (IUDs), and the Pill. However, Phexxi should not be used with vaginal rings like the NuvaRing, according to the FDA.

Phexxi's ingredients are non-toxic and commonly found in food products. Lactic and citric acids are natural preservatives, and potassium bitartrate is better known as cream of tartar used in baking. That means it is safe to engage in mouth-to-vulva oral sex while using Phexxi. But be warned, Phexxi is acidic and has a very tart taste.

How Effective Is Phexxi Compared To Other Contraceptives?

According to data cited by the FDA, Phexxi is about 86% percent effective with typical use. (With perfect use, that number rises to 93% effective, according to Planned Parenthood—but perfect use with any form of birth control is rare). Planned Parenthood says this means about 14 in 100 women who use Phexxi (again, with typical use) will become pregnant.

That's much less effective than the implant, an IUD, or male or female sterilization, which has about a 99% effectiveness. Even with typical use, the patch, the ring, the shot, and the Pill—which range from 91% to 94% effective—are all also more effective than Phexxi.

Instead, the vaginal gel is more on par with other non-hormonal methods like male and female condoms, diaphragms, spermicides, and the sponge, for preventing pregnancy. Worth noting: The CDC calls these methods "less effective" than their counterparts.

Planned Parenthood also says you can (and possibly even should) use Phexxi with plastic or latex condoms for extra protection against pregnancy as well as STDs. Phexxi can also be used with a diaphragm and some forms of hormonal contraceptives, like the patch, Pill, or shot.

How Many Times Can You Actually Take Plan B? Asking For a Friend

Who Is Phexxi Best For?

"Phexxi is great for those who are looking for contraceptive alternatives, don't desire hormones, and are possibly not sexually active consistently," Jessica Shepherd, MD, OB-GYN, and founder of Sanctum Med Wellness, told Health. Phexxi can be a good fit for those who aren't interested in taking a daily pill or using a long-acting form of birth control like an implant, IUD, or ring, Dr. Shepherd said.

Phexxi may also be an important choice for people who can't use hormonal forms of birth control. "Not every woman can use a hormonal birth control—women who are at risk for blood clots, hormone-driven cancers like certain forms of breast cancer and other gynecological cancers may be advised to use a non-hormonal method," Dr. Wider said.

For women who use lifestyle methods—like fertility awareness of the withdrawal or "pull-out" method—Phexxi may be a good addition to their routine, Julie Levitt, MD, an OB-GYN at The Women's Group of Northwestern, in Chicago, told Health. "At worst, it's 86% effective, but it could be much better if women are watching their cycle," Dr. Levitt said.

There's also this to consider, Dr. Wider added: "Non-hormonal methods would likely eliminate some unwanted side effects that women can experience on hormonal birth control like mood swings and weight gain." If you are especially concerned about any of these things, talk to your healthcare provider about trying Phexxi.

Does Phexxi Have Any Side Effects or Risks?

According to the FDA, the following symptoms or conditions are listed as potential side effects of using Phexxi:

Phexxi isn't perfect, and experts are particularly concerned about the 86% effectiveness.

"It doesn't give ideal contraception, so if you are going to be having frequent intercourse—and particularly if you are a young fertile woman—I would suggest speaking with your health care provider to get a more effective contraceptive," Mary Jane Minkin, MD, a clinical professor of obstetrics and gynecology and reproductive sciences at Yale Medical School, told Health.

Dr. Minkin noted that more effective non-hormonal birth control options are available, such as the Paragard IUD. Also known as a Copper-T, the IUD is made of copper, which creates a toxic environment for sperm. "It gives them 99% effective contraception, has no hormones, and lasts for at least 10 years," Dr. Minkin added.

The side effects can also make Phexxi a less-than-ideal choice for some. "Women prone to urinary tract infections or recurrent yeast infections should definitely check in with their doctor," Dr. Wider said.

Overall, Phexxi adds one more birth control option to the table, which is never bad. "It's a great addition for women who are seeking non-hormonal methods," Dr. Wider said. And when more options are available, more women may use them to prevent pregnancy. As Dr. Levitt noted: "Anything is better than nothing." 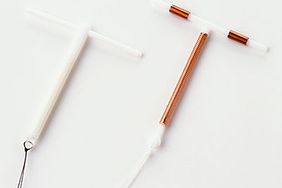