Chances are you'll want to reconsider if you plan to use it.

The company Jiftip created a product as an alternative to condoms. The Jiftip sticker, which consists of polyurethane film with an adhesive on one side, is designed to block the opening of the penis, keeping pre-ejaculate and ejaculate fluids inside during sex.

However, are these stickers safe to use in place of condoms? Here's what you need to know about the product.

What Is Jiftip Meant To Do?

The website encouraged its customers to "[u]se [Jiftip] for pleasure and delight," but the product is ultimately designed to help couples avoid using condoms. With that in mind, you'd expect the stickers to do what condoms do, namely prevent pregnancy and sexually transmitted illnesses (STIs). But this product does neither. "Jiftip is not approved for pregnancy or STD prevention usage," the company said in its frequently asked questions page.

What To Consider About Using Jiftip

For Jiftip to work effectively, it would have to prevent all fluid from escaping the penis. But this might not be entirely safe: "Ejaculating under high-pressure circumstances may back up your system," urologist Koushik Shaw, MD, of the Austin Urology Institute explained.

It might also be painful. Dr. Shaw indicated his worries that this practice could lead to prostate or penile pain if done repeatedly. "The body is supposed to do things in a certain way, so I can't say this would be recommended," Dr. Shaw added.

Another concern is the efficacy of the seal itself. H. Hunter Handsfield, MD, professor emeritus at the University of Washington Department of Medicine, Division of Allergy & Infectious Diseases, told Health that blocking ejaculation would require a pretty rigorous seal, and there's no data explaining how well the Jiftip stays put.

"I would be a little surprised if this device works 100% of the time in maintaining its seal," Dr. Handsfield said. Jiftip has claimed that if you follow the application instructions properly, the sticker "will remain in place until removal." However, if it isn't tight or applied correctly, unintended pregnancy or sexual infections that are transmitted through semen become an even greater risk.

Of course, if the seal is very tight, peeling it off of the sensitive skin becomes trickier. "For this to work, it has to adhere pretty firmly," Dr. Handsfield said. "Is removal like a painful Band-Aid, or does it come off fairly readily?" Turns out, it maybe at the bandage removal level of pain: Jiptip mentioned that it can be painful to remove the sticker and has added Jiftip Fast Removal Oil for sale alongside its product. Furthermore, depending on the guy and how sensitive the skin is, the adhesive could also cause some irritation, Dr. Shaw added.

That "skin-on-skin pleasure" may be the big draw here, but unintended pregnancies and STIs are too big of a risk. "I wouldn't necessarily say [you should] be the guinea pig for something like this," Dr. Shaw said. Instead, stick to birth control methods, recommended by the Centers for Disease Control and Prevention (CDC), such as the pill or an IUD to prevent pregnancy. And while they may not be a fan favorite, condoms are still the most effective method of birth control to protect against STIs. 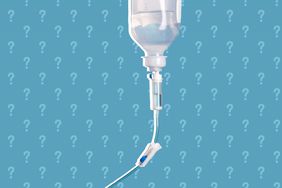