Here’s how the brain changes with menopause and how you can reduce your risk of Alzheimer’s.

Menopause is a natural part of aging for about half the population. It marks the end of fertility, as the ovaries gradually reduce sex-hormone production and monthly periods cease. But menopause is also a focus for researchers who are trying to unravel one of medicine's ongoing mysteries: Why is it that almost two-thirds of people with Alzheimer's disease are women?1

Alzheimer's disease (AD) is the most common type of dementia—which is the progressive loss of memory and other brain functions.2,3 Symptoms of AD can interfere with daily life and include repeated memory loss, difficulty having conversations, and frequently making poor decisions.4,5

Scientists don't yet fully know what causes Alzheimer's disease, but they have found that a combination of different factors, from biological to lifestyle, could increase your risk of developing it.4

"We have known for decades that, after getting older, simply being a woman is the major risk factor for Alzheimer's disease," said Lisa Mosconi, PhD, an associate professor of neuroscience in neurology and radiology at Weill Cornell Medicine. Scientists used to think this was because women tend to live longer than men, but now hormones are believed to play a major role, said Mosconi. "Our research points to menopause as an activating factor."

Menopause as a Potential Risk Factor for Alzheimer's Disease

Menopause transition, or perimenopause, often begins around ages 45–55 and can last up to 7–14 years.6 During this time, the ovaries gradually produce less sex hormones, such as estrogen and progesterone. These are the same hormones that rise and fall during a typical menstrual cycle. Once females reach menopause, about a year after their last menstrual period, the ovaries stop working.

But as the ovaries change during and after menopause transition, the brain changes as well.5

"Many of the symptoms of menopause—the hot flashes (a rise in body temperature), night sweats, anxiety, depression, insomnia, brain fog, memory lapses—don't start in the ovaries; they start in the brain," said Mosconi.

However, researchers don't know if symptoms of menopause can be used to predict Alzheimer's disease later in life, said Mosconi.

Ideally, to study whether menopause is a risk factor for Alzheimer's disease, researchers would need to examine the same group of women from their early 50s (average start of perimenopause) up to their early 70s (average start of AD), explained Mosconi, who is also the director of the Alzheimer's Prevention Program at New York Presbyterian Hospital and Weill Cornell Medical Center. But that kind of long-term study is still to come.

Currently, several researchers are exploring signs of early dementia in the female brain which can show up years before AD symptoms surface, said Mosconi.

One of the signs of Alzheimer's disease that they previously looked for was increased amounts of beta-amyloid proteins in brain regions that control memory. Researchers used to think these proteins played a primary role in AD, based on a 2006 breakthrough study published in Nature. However, this July, a Science investigation reported on the potential fabrication of evidence from this study. Further investigations are ongoing, and it's currently unclear whether beta-amyloid proteins play a role in Alzheimer's disease.9

Still, other signs of Alzheimer's disease may include reduced energy production in these regions, as well as loss of gray matter.10,11 (Gray matter refers to areas in the brain that are highly concentrated in neurons, the brain's messenger cells.)12

Mosconi and other researchers have looked for these signs in brain imaging studies of people aged 40–60. For example, in a three-year study, women who were perimenopausal or postmenopausal showed more of these early signs of AD, compared to men of the same age.10

Estrogen and the Brain

Of the sex hormones, estrogen may play a greater role in protecting the female brain against dementia.5,13 For example, estrogen-related proteins in the brain are located in regions that involve learning and memory, such as the prefrontal cortex, hippocampus, and amygdala.14

"Estrogen in particular, or more specifically estradiol (a type of estrogen), is the 'master regulator' of the female brain," said Mosconi. "It regulates brain energy levels, supports immunity, and promotes cellular growth and communication, among other things."

This estrogen loss during menopause transition might increase a person's risk of Alzheimer's disease and other dementias, said Christian Pike, PhD, a professor of Gerontology at the University of Southern California, whose research specializes in sex differences in Alzheimer's disease. Sometimes called the estrogen hypothesis, this theory is now more widely accepted among researchers as a possible explanation for why women are at greater risk of AD.5

While the average age of menopause transition is 51, the loss of estrogens from the ovaries can happen earlier. Some people can start perimenopause in their early to mid-40s, either naturally or even prematurely from a surgery.13

A surgery to remove the uterus or ovaries for medical reasons can lead to surgical menopause, which starts right away, unlike natural menopause transition, which is a gradual decline of hormones.6 Several studies have found that women with early menopause from a surgery have an increased risk of dementia.13

This is likely because with surgical menopause, estrogen loss happens much earlier in life and you spend more years without its protective effects on the brain.

People who enter menopause before age 45 may also be more likely to develop dementia earlier in life (before age 65), according to a preliminary study of data from over 150,000 UK women. (The study has yet to be peer-reviewed.)15

Currently, people who enter early menopause have the option of taking hormone medicine, including estrogen, to treat menopausal symptoms.16

The FDA even warns that people aged 65 or older who take hormone therapy could increase their risk of dementia.16 In turn, more clinical trials are needed to explore how hormone therapy affects the brain, as well as to develop safer hormone formulations, said Mosconi.

All of this raises another question: What about men? After all, males produce estrogen as well, albeit in much smaller amounts than females do.17

For males and females, estrogen is involved with bone health, cell production, fertility, and liver and brain functions.5,17 But males don't experience a major decline of estrogen.

Rather, males go through andropause, usually around their 40s, when the testes gradually produce less testosterone—the primary sex hormone in males.13 (Females produce testosterone as well, but not as much as males).17 This testosterone loss from andropause is associated with an increased risk of Alzheimer's disease in men.13

Sex differences can help researchers determine what brain changes are unique to menopause or andropause when comparing females and males of the same age.

But Pike points out, "Sex differences are more than just estrogen differences." One example: women are more likely than men to have a major gene mutation (APOE4 gene) linked to Alzheimer's disease.13 Though, Pike adds, it's currently not known whether menopause is related to any genetic risk for AD. It's another avenue that researchers are studying.

How to Reduce Your Risk of Alzheimer's Disease

There isn't yet a cure for Alzheimer's disease nor any known strategy for preventing this type of dementia.4 But experts recognize that the transition to menopause raises the risk of high blood pressure, heart disease, diabetes, and greater vulnerability to head injuries—which are all risk factors of Alzheimer's disease as well.5

And so, they recommend that a well-rounded healthy lifestyle may help reduce your risk of developing AD.4 This includes: 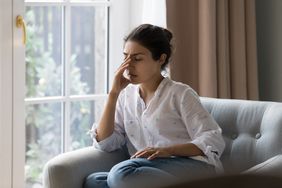