Yes, Brain Games Improve Memory, But Only Under Some Circumstances

You've probably seen ads for computer games designed to make you smarter and keep you feeling young—mentally, at least. But maybe you've also heard that their benefits have been exaggerated, if not debunked entirely. So what's the deal with these brain training games? Are they worth the time and money?

Well, a review of research found they can improve memory and mood in older adults who've begun to experience a decline in their mental abilities. The caveat: Most of the research involved supervised group training—which means the games may not be as helpful to folks playing them at home.

The review also showed that brain training, even in a group setting, didn't do any good for people already diagnosed with dementia.

The idea behind brain training is to enhance memory and thinking skills by practicing mentally challenging exercises designed to look and feel like video games. Several software programs and websites have been marketed for these purposes in recent years, but some have faced criticism or legal action for overstating their benefits. And some studies have suggested that any mental boost from such programs could be due to a placebo effect.

RELATED: 9 Foods That May Help Save Your Memory

Indeed, there has been a lack of consensus in the scientific community about the true value of these programs. So to take a big-picture look, researchers from the University of Sydney's Brain and Mind Centre combined data from previously published randomized clinical trials, including nearly 700 participants and spanning more than 20 years, into one large pool known as a meta-analysis.

Of those studies, 17 included adults with mild cognitive impairment (MCI)—a decline in thinking and memory that has not yet affected daily living skills—and 12 included adults with full-blown dementia. MCI has at least a 10 percent chance of progressing to dementia within a year.

When the researchers combined and analyzed data only involving people with MCI, they found that brain training led to improvements in global cognition, memory, learning and attention, mood, and self-perceived quality of life. However, when they added in data from the 12 studies on people with dementia, that association disappeared.

Lead author Amit Lampit, PhD, a research fellow in the School of Psychology, says that brain training can play an important role in helping to reduce early symptoms of memory loss. "Our research shows that brain training can maintain or even improve cognitive skills among older people at very high risk of cognitive decline," he said in a press release, "and it's an inexpensive and safe treatment."

But, Lampit says, most large trials have been done in supervised settings—and it's unknown whether online programs used at home use would have the same effects. In fact, the researchers did compare computerized brain training in the two types of settings in an earlier meta-analysis from 2014. The results weren't promising: They found that doing these exercises in a group and with a trainer provided significant benefits, but doing so at home did not.

A Workout For The Brain

"Think of it this way: For most people, joining a gym or aerobic class are more likely to help them achieve the results they want than buying home fitness equipment," Lampit told Health. "Similarly, doing cognitive training in a supervised format will help people to persevere with their training program, do the exercises that fit them best, and problem-solve on the fly."

"Rather than recommend at-home brain training at this time," Lampit says "he would like to see more community centers and clinicians establish group facilities similar to those with evidence already behind them."

"The great challenges in this area are maintaining training gains over the long term and moving this treatment out of the clinic and into people's homes," he said in a press release. "This is exactly what we are working on right now."

While there's evidence that memory exercises can improve memory-related tasks, Lampit cautions that it's still hard to tell what that means for noticeable, real-life symptoms.

"Whether training gains transfer into an everyday function is difficult to know," he says. "As recently noted by FDA officials, we simply do not have outcome measures that are objective and sensitive enough to detect a functional change in people who do not have dementia."

RELATED: 6 Weird Things That Can Mess With Your Memory

And there's still no evidence that brain training can actually prevent dementia. "This will require very large trials with long follow-ups and training periods," Lampit says, "and the results of our meta-analysis provide the necessary evidence to motivate such studies."

In fact, Lampit and Valenzuela are part of a large Australian trial that will test whether a tailored program of lifestyle modification, including weekly brain training over four years, can indeed stave off dementia.

The study results were published in the American Journal of Psychiatry. In previous meta-analyses, the researchers have also found that brain training can be beneficial to other groups such as healthy older adults, people with depression, and people with Parkinson's disease.

"Taken together, these wide-ranging analyses have provided the necessary evidence to pursue clinical implementation of brain training in the aged-care sector," Lampit says, "while continuing research aimed at improving training effectiveness." 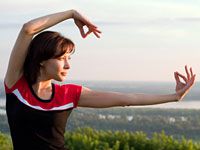 Brain Games and Exercise: A Drug-Free Treatment for ADHD?