Chili, cocktails, and other surprising foods to watch out for if you are allergic to peanuts or tree nuts

My younger son has food allergies and I'm absolutely obsessive about helping him steer clear of peanuts and tree nuts. Yet somehow, last month, I brought him home a pistachio sandwich.

Let me explain: I ran to the deli to buy a chicken salad, but it was next to a salad with nuts. Trying to avoid that cross-contamination risk, I pivoted and grabbed Gus, who is 10, a slice of an Italian Combo hero, stupidly without asking what was in it. One bite in he said, "My mouth feels itchy and numb." I ripped apart his sandwich and found the meat dotted with green flecks...oh no, pistachio? A quick call to the deli revealed he had eaten mortadella—Italian pork studded with one of his worst allergens.

Thankfully, after an injection of epinephrine and a few hours in the ER, Gus was fine. But my husband and I were traumatized. Where else were there nuts lurking? Raising a child with a food allergy sometimes feels like being a hockey goalie, to use an analogy from Gus's favorite sport: You're always guarding against not only the obvious threats (that Thai takeout) but also the surprise wraparound ones you never see coming (nut meat, I'm talking to you).

And, in a way, having a food allergy is a paradoxical health problem: You are perfectly healthy. And yet the wrong food, in the wrong amount, without prompt administration of the right amount of epinephrine, can kill you. To make sure that we know all the wild cards out there, I consulted Sujan Patel, MD, an allergist/immunologist at New York University Langone Medical Center in New York, and David Stukus, MD, a Columbus-based spokesperson for the American College of Allergy, Asthma, and Immunology.

In 1986, a freshman at Brown University tragically died after she ate restaurant chili thickened with peanut butter, reported in the New York Times. More recently, a 28-year-old dad in England reportedly died from anaphylaxis after having a chili burger that likely contained peanuts. PB may not be a classic ingredient in this comfort food, says Dr. Patel, "but with chili cook-offs and all kinds of ways to prepare things, you shouldn't assume it is safe."

RELATED: 31 Everyday Things You Didn't Know You Could Be Allergic To

Still, the even more common danger in Mexican food is the mole sauce. While mole's most famous ingredient is chocolate (itself a potential disaster for the nut-allergic), peanuts or peanut butter may also be in the mix. "Sauces, in general, are dicey," warns Dr. Patel, adding that Indian and Thai cuisines are particularly tricky. "Indian cooking uses cashews and almonds made into a paste and then used as a thickener."

Most fries are a-ok, but when grabbing fries when you are out, do ask about the oil. Peanut oil is the go-to at some chains such as Five Guys, as well as smaller restaurants. "The interesting thing about peanut oil," says Dr. Patel, "is that when it's made in the U.S. it is so refined that almost nobody with a peanut allergy would react to it. But the problem is we don't know if it is one from China, which is much less refined. We don't tell people this because we don't want them to take a chance."

My family got stumped by cottonseed oil on a trip to Florida. ("Siri, is cottonseed a nut?") Nope, cottonseed oil, I've since learned, is not a nut, though it's pretty terrible for your health.

My son's kryptonite—mortadella—is fancy Italian bologna that was banned from import to America for years due to an Italian outbreak of African swine fever, according to The New York Times. More expensive than bologna and speckled with fat and pistachios, it isn't a big seller in the U.S. (which almost explains how I could be half Italian-American, raised on antipasto spreads, and never heard of it). "A real fluke," is how Dr. Patel described my son's close call. And yet in 2016, BJ's Wholesale Club issued a recall of deli meats for undeclared pistachios; they had been sent Citterio's Mortadella by mistake and sold it—along with other meats sliced on the same equipment—without listing pistachio on the labels.

So how do you make sure your cold cuts don't come with an unwanted side of nut residue? "Ask the person at the counter about any potential source of cross-contact," advises Dr. Stukus. "And if they're unsure, steer clear and opt for prepackaged lunch meat with a nut-safe label."

Better ask what's in that signature cocktail before you knock it back. Major vodka makers now sell bottles infused with hazelnut, almond, and other tree nuts. Frangelico gets its flavor from hazelnuts and Nocello from walnuts. And here's a who knew: Many gins, including Bombay Sapphire, are flavored with almonds. Not even beer is completely safe. Brown ales may contain peanuts or macadamia, walnut, or other tree nuts.

Is your toddler at the stage where they put everything in their mouth? If they're allergic to peanuts or tree nuts, watch out for your dog food, warns Dr. Patel. Pet foods are not subject to The Food Allergen Labeling and Consumer Protection Act—a law mandating that food labels clearly list out in plain English if they contain any of the top eight most common allergens (peanuts, tree nuts, milk, eggs, wheat, soy, shellfish, and fish). But a scan of that puppy chow label should alert you to peanuts, he adds. (When in doubt, call the manufacturer.)

Bird food almost always contains nuts or has a nut warning. Our family's solution is to buy food-grade sunflower seeds (labeled as nut-safe) for our outdoor feeders.

A gluten-free cupcake or bread may seem harmless for all, but don't be fooled: It can pack lupin, "a legume frequently used as flour in gluten-free products that can cross-react with a peanut," says Dr. Stukus. He notes that there have been many reports of people with peanut allergies having reactions to lupin. Also, watch out for almond flour, sometimes used to hold things together in gluten-free sweets.

Another concern? Nut butter popping up in unexpected places. "I had a mom whose child had a reaction to kale chips," shares Dr. Patel. "Randomly, they were made with cashew butter."

To stay one step ahead, read labels every time (ingredients on familiar products can change). And, as I learned the hard way, always ask, even when it seems unlikely that a dish would contain nuts. When it comes to managing food allergies, you can never be too careful. My son knows this well: Hand him a banana and he'll ask you, "Are there nuts in it?" 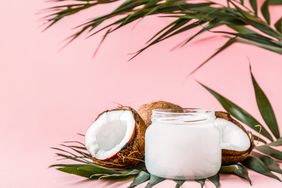