20/20 anchor Elizabeth Vargas revealed that she had been battling alcoholism and that she sought treatment at a rehab center. Vargas' drink of choice? Wine, and lots of it.

In an interview that aired on Good Morning America in 2014, 20/20 anchor Elizabeth Vargas revealed that she has been battling alcoholism and that she sought treatment at a rehab center in the fall. The mother of two returned to her post at 20/20 soon after.

During the interview with GMA anchor George Stephanopoulos, Vargas said that she's suffered from panic attacks since age 6 when her father left to serve in the Vietnam War. The panic attacks continued into adulthood and she dealt with her anxiety and stress by starting to drink. Her drink of choice? Wine, and lots of it.

"At night I – that was a ritual," she said. "I should've realized it was a problem way back when Zachary, my oldest son, was born. And he used to call my nightly glass of wine 'mommy's juice.' You know, and I thought that was hysterical. It didn't occur to me that that was a problem."

Eventually, Vargas did start to worry about her drinking—at least subconsciously. In 2010, she did a 20/20 special on moms with secret lives as alcoholics. In the episode titled "Mother's Little Helper," she profiled four women, including popular mommy blogger Stefanie Wilder-Taylor, author of books including Sippy Cups Are Not for Chardonnay and Naptime Is the New Happy Hour. Wilder-Taylor told 20/20 that she would routinely finish a bottle of wine while her husband drank just one glass. But even he didn't find her drinking excessively. "I rationalized it definitely to a degree," he said. "I think I fell into that same category where I thought alcoholism is people who are running around with a Jameson's bottle in their back pockets."

Working on these projects still didn't convince Vargas that she needed help. "I've done a like half-dozen 20/20 hour-long specials on drinking," she said. "It's one thing to report on it, it's another thing entirely to admit it. Because even to admit it to myself was admitting, I thought, that I was a failure."

Not even Vargas' husband confronting her about her drinking was effective. Then one Saturday afternoon, she showed up to a 20/20 shoot and was "in no shape to do that interview." That was her wake-up call. "When I got out of the car I realized, 'what am I doing?' And that's when I knew I needed to get help," Vargas said. In November, she sought treatment at a rehab center that specializes in trauma and she's now a part of Alcoholics Anonymous.

Vargas said that daily stress triggered her drinking and that rehab helped teach her how to deal with her anxiety. "Listen, there are lots of people who feel a lot of stress. Not everybody turns to a glass of wine or three like I did, or four, like I did on some occasions. What I learned to do when I was away was to feel the feelings," she said. "You know what? They're not going to kill you. You have to experience them. I never learned that skill and it makes it tough some days. Alcohol for me is no longer an option."

Not only can excessive drinking affect your career and your relationships, as Vargas found, but it's also been linked to an increased risk for health conditions like breast cancer and obesity. On the other hand, moderate alcohol consumption is associated with improved heart health, including increasing your good cholesterol and lowering your blood pressure, in addition to a reduced risk for type 2 diabetes.

So where should you draw the line? The National Institutes of Health says that it's unlikely—but not impossible—that women who consume up to 3 drinks on any single day AND no more than 7 drinks per week have a drinking problem. (One drink equals about 12 ounces of beer, 5 ounces of wine, or 1.5 ounces of liquor.) But for the most health benefits—and the fewest risks—health experts recommend having no more than one drink per day. Problem is, it can be all too easy to go overboard, especially when drinks can contain more alcohol than you realize or they come in glasses way larger than the serving size.

We've all overdone it as adults at some point, but it shouldn't happen on the regular. Instead of reaching for that second (or third) glass of wine to help you de-stress, learn these 7 tricks for instant calm or try these head-to-toe solutions for stress. And if you're worried about your alcohol use, learn the signs that suggest you may have a drinking problem. It's not too late to get help.

How to Decrease Social Anxiety at a Party Using 5 Ways 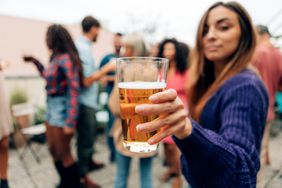