High RSV, flu, and COVID numbers are to blame for a shortage of children's ibuprofen and acetaminophen, experts say.

High numbers of respiratory syncytial virus (RSV), COVID, and flu have driven a spike in demand for pediatric pain and fever reducers—such as ibuprofen and acetaminophen—so much so that parents are finding it difficult to find the medications their kids need.

But many parents in the US say it hasn’t been easy to find the medications on store shelves.

“A lot of the patients and patient families that I take care of are coming in and telling me that they're having difficulty accessing the medications at their local drugstore,” Lena van der List, DO, community pediatrician at UC Davis Children’s Hospital, told Health. “So we’ve had to brainstorm and come up with some other options.”

Here’s what experts had to say about the reported difficulties in accessing this over-the-counter medication, when it might subside, and what parents can do to help their children feel better in the meantime.

Supply chain issues have commonly been to blame for product shortages and delays over the last few years, but this pediatric acetaminophen and ibuprofen access issue is different, Michael Ganio, PharmD, BCPS, senior director of pharmacy practice and quality at the American Society of Health-System Pharmacists (ASHP), explained.

“We have received some consumer reports or patient and caregiver reports about difficulty in accessing these drug,” he told Health. “The important thing is there's no issue with the manufacturer of these products. It's more an inventory issue with making sure there’s adequate inventory in the regions that are experiencing these high rates of respiratory infection.”

The ASHP has spoken with some of these drug manufacturers, Ganio added, who said that the supply is available, but it’s challenging to keep up with demand and get the products on store shelves.

“We continue to experience high consumer demand. We are doing everything we can to make sure people have access to the products they need,” a spokesperson for Johnson and Johnson said in a statement. “Some products may be less readily available due to this increased demand but we are not experiencing an overall shortage of Children’s Tylenol or Children's Motrin in the United States."

It’s a different story for prescription and healthcare-use versions of these drugs, however. The ASHP reported shortages for acetaminophen in October and ibuprofen in late November. Hospitals use single use, pre-packaged medication doses to reduce the risk of any dosing errors, Ganio explained—and those actually are in short supply.

“We are seeing shortages of some of those products and that's a function of the high rate of hospitalizations, particularly in pediatric patients due to RSV and of course now flu is starting to take off,” said Ganio.

The ASHP is also seeing some shortages in medications used to treat adults with respiratory illnesses, too. Pediatric versions of oseltamivir, also known as Tamiflu, were in short supply first, but now adult strengths are also affected.

For over-the counter pediatric pain and fever reducers, however, the good news is that those issues should be short-lived since there are no actual manufacturing issues, Ganio explained. Eventually, demand for these medications will subside as cases hopefully drop.

With Medication Hard to Come By, What Can Parents Do?

Though issues with accessing the medication should eventually dissipate, there’s no denying the fact that children sick with flu, COVID, or RSV right now may not be able to get the acetaminophen or ibuprofen they need to help manage symptoms. There are, luckily, a few alternatives that parents can turn to.

“Sometimes your doctor can prescribe you these medications to help, and there may be some extra that they have sort of behind the counter in the pharmacy,” Dr. van der List said.

Parents can also try to search out generic versions of the medications, which may be in stock as opposed to the brand name Tylenol or Motrin, or they can ask friends and neighbors if they have any extra medication—as long as it's unexpired—they’d be willing to share, she added.

But while looking for alternatives, there are also a few things parents should avoid, experts said. If there are available compounded medications—like pain reliever and fever reducer medication plus something else, such as a decongestant—it’s best to consult a pediatrician, Dr. van der List said, since they may not be suitable for children.

In the absence of acetaminophen and ibuprofen, the American Academy of Pediatrics warns against aspiring or any medications containing aspirin to anyone under the age of 18 with a viral illness. This is due to a strong association between pediatric aspirin use and Reye syndrome, a rare but serious illness.

Swapping out children’s medications for adult ones should also only be done after speaking with a pediatrician, said Dr. van deer List. Dosing for children’s medications is based on their weight, so it’s important to make sure they’re not taking an unsafe amount—these can often be quite specific, so Dr. van der List recommended that parents check dosing charts for both acetaminophen and ibuprofen when giving their children medication.

Also, when a product is hard to find, people may have a tendency to stock up and buy more than they need when they do find it in stock. But, Ganio said, it’s best to not overbuy—that can make supply issues worse.

Making All Medication Available and Accessible

Acetaminophen and ibuprofen are just the most recent medication shortages making headlines—the FDA has reported a shortage of oral amoxicillin, an antibiotic, during this cold and flu season, plus there are over 100 other medications that the FDA has listed as “currently in shortage.”

“We do have a chronic problem with shortages, particularly of older, generic medications and it really relates to the quality in manufacturing,” Ganio said. “Particularly the injectables that we use in hospitals, these are extremely disruptive shortages. So you can imagine how it feels when you can't get a dose of acetaminophen or ibuprofen or an antibiotic for your child. Imagine trying to find the life saving oncology drug.”

It’s important for the government and pharmaceutical companies to work together to address shortages as soon as possible, Dr. van der List said, as is investing in the quality of manufacturing and investing in technologies so that production can be ramped up when necessary, Ganio added.

Until RSV, COVID, and flu rates go down, it may still be difficult to find acetaminophen and ibuprofen. But even though it can be frustrating to not have medication to help ease a child’s fever or pain when they’re sick with a respiratory virus, empty store shelves may not necessarily be a reason for parents to get too worried, Dr. van der List said, especially if their child’s illness isn’t severe.

“You could just use supportive measures alone if your kid does not have a high fever,” she said. “The medicine doesn’t treat the viral illness, it just helps with some of that symtomatic relief from the fever. And so it’s not something that we all have to panic about—they’ll get through their viral illness even if they don’t get their fever treated.” 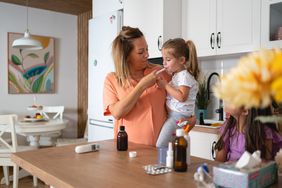 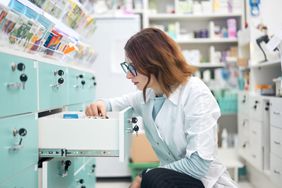 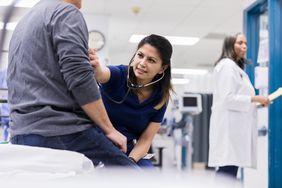