A dermatologist explained this complicated hair loss in a quick TikTok video.

Alopecia is well known as a general term for hair loss, but some forms of alopecia don't get a lot of attention. Central centrifugal cicatricial alopecia (CCCA), the most common scarring alopecia among Black women, is one of them.

Angelo Landriscina, MD, dermatology chief resident at George Washington University Hospital in Washington, DC, recently took to TikTok to share some truths about the condition and bring awareness to a commonly overlooked issue in dermatology affecting the Black community. "We need to talk more about conditions like CCCA," Dr. Landriscina said in an Instagram post related to his TikTok video. "This is a type of scarring hair loss mostly affecting Black women first described in the 1960s. Not much effort was put into studying it until the 1990s. While new headway has been made in order to fully elucidate the etiology behind it, I think that conditions like this expose some glaring racial differences when it comes to medicine."

Here's what you need to know about CCCA—including who's most affected by it, what the signs and symptoms are, and how it can be treated and prevented.

What is CCCA and who's most affected by it?

Once known as 'hot-comb alopecia,' per Dr. Landriscina, "CCCA is a type of inflammatory, scarring hair loss that typically starts at the center of [the] scalp and gradually moves outwards," he tells Health. "In some cases, it can affect most of the scalp."

It's unknown exactly how many Black women are affected by CCCA, due to scarce data and research. However, a 2016 review, carried out by the Department of Dermatology and Cutaneous Surgery at the University of Miami Miller School of Medicine, found that it usually affects women in their teens or 20s—identifying it as one of the most common reasons for hair loss consultation among African American women. Narrowing it down a little more, a small 2011 study involving 529 African American women, published in the Journal of the American Academy of Dermatology, found that 5.6% of African American women experienced CCCA.

According to Dr. Landriscina, the scarcity of studies surrounding CCA highlights the health disparities in the field of dermatology for Black women. "[CCCA] wasn't well understood or well studied, likely due to a lack of Black dermatologists and also the fact that Black communities are underserved when it comes to dermatology. Conditions like this really expose the effects of racism in medicine."

This racism, as Dr. Landriscina said in his TikTok video, is also apparent in how the medical community has responded to CCCA as compared to a skin condition like psoriasis, which is common in white Americans. "Very few substantial investigations about CCCA are published each year and there are no FDA-approved treatments for it," he said. "In contrast, a disease like psoriasis affects about 3.6% of white Americans (compared to CCCA's 5.6% of African American women), according to the American Academy of Dermatology, and every year, thousands of new investigations are published about psoriasis. What's more, right now there are 35 treatments that are FDA-approved for the treatment of psoriasis," Dr. Landriscina added.

What are the signs and symptoms of CCCA?

People with CCCA may notice hair breakage as an initial sign. Other symptoms include itching, pain or tenderness of the scalp, a spongy texture to the scalp, and flaking or redness of the affected areas. But, due to the lack of public awareness surrounding the condition, many women simply aren't sure what those symptoms mean and may avoid treatment. "Many patients with CCCA don't know what the cause of their hair loss is, or wait a while to see if it resolves on its own before seeking medical treatment because not much of the public is aware of what it is," Dr. Landriscina says. "This is unfortunate because once the hair has gone, it most likely will not come back even with treatment."

When a woman does seek treatment from a dermatologist regarding her hair loss, the Skin of Color Society (SOCS) says a dermatologist can typically make a diagnosis by examining the scalp. Many will also perform a scalp biopsy—in which a small sample of skin is taken from the scalp—and send it to the lab for evaluation and confirmation of the diagnosis.

The exact cause of CCCA is unknown, but it appears to be an abnormal inflammation around the follicles. "Genetic factors as well as microtrauma to the follicles from tension, chemical injury, or heat injury to the scalp associated with common hair care practices among Black women contribute to the pathogenesis of this disorder," Andrew F. Alexis, MD, MPH, director and chair of the Skin of Color Center at Mount Sinai West Department of Dermatology, tells Health. But while studies have shown that hair care practices such as chemical relaxers, hair weaves, and hot combs are prevalent in people with CCCA, Dr. Landriscina says it's hard to directly link the two or form a causal relationship between them.

Luckily, newer research is beginning to provide some more necessary answers about deeper causes of CCCA. In 2019, a study published in the New England Journal of Medicine identified a potential gene that seems to be mutated in some patients with CCCA, called PADI3. "This is a gene important for the development of the hair shaft," Dr. Landriscina explains. "Research pointing to a genetic component to the disease makes a lot of sense—from my own experience, many of my patients with CCCA have reported that other women in their family suffer from hair loss too. While this does not fully explain the cause of CCCA, it does mean we are getting closer to fully understanding it."

How can you treat and prevent CCCA?

While there are no FDA-approved treatments for CCCA, dermatologists recommend therapies that decrease inflammation in the scalp, such as steroids delivered topically or by scalp injection. Dr. Alexis has also found success with oral anti-inflammatory medications, such as doxycycline, which is most commonly used to treat bacterial infections. Additionally, the Skin of Color Center is currently conducting a research study into an oral medication called apremilast, which works by reducing inflammation and is FDA-approved for psoriasis. "The results of this ongoing study may show promise as a new therapy for this silent epidemic that disproportionately affects women of color," Dr. Alexis says.

The SOCS also suggests minoxidil, an over-the-counter topical solution commonly used for the treatment of male-pattern hair loss, to help stimulate hair growth from follicles that are not scarred from CCCA. To prevent inflammation and ancillary hair damage, the SOCS also recommends gentle hair care practices such as natural (i.e. chemical and heat-free) styling, reduced use of relaxers, and limited styling products.

Once inflammation has subsided in patients with CCCA, they may choose to undergo hair transplantation to restore hair to the affected areas. "It's important for patients to understand that the goal of treatment is to maintain the hair they have," Dr. Landriscina says. "I always tell my patients to think of stopping progression of CCCA as the goal, and any additional hair growth they may see as a 'bonus.'"

Because of the nature of scarring alopecia, Dr. Landriscina says it's important that anyone who thinks they're experiencing hair loss checks in with a dermatologist as soon as possible. "Remember, time is hair," he says.

Dr. Landriscina hopes that the medical community will take the necessary steps to ensure Black patients get the dermatology care and treatment they need. "We need to improve access to care for our Black patients," he says. "We also need more Black dermatologists. And finally, we need to make it our mission to study diseases that disproportionately affect Black communities. There's a long road ahead, and it will take effort from the whole medical community to get us where we need to be." 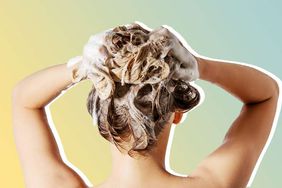