Can You Spot the Skin Cancer?

Skin cancer isn't always simple to identify. In fact, it often goes undiagnosed for far too long. Knowing which marks and blemishes on your body should be cause for concern can help you to get diagnosed before it's too late.

The most common form of skin cancer is basal cell carcinoma. Like squamous cell, it tends to show up in places that get a lot of sun, like the face, shoulders, and back.

Melanoma is the deadliest from of skin cancer. Look for its so-called ABCDE signs: Asymmetry (the mole's halves don't match); Borders that are uneven; Color ranging from light to almost black; Diameter typically larger than 6 millimeters (the size of a pencil eraser); and Evolution of some kind in a short amount of time—what doctors consider the most telling signs.

The scaly or crusty growths from actinic keratosis are the most common precancer, affecting over 58 million Americans.

Squamous cell carcinoma is the second-most-common skin cancer. It may present itself on all areas of the body, but most commonly it's found on areas frequently exposed to the sun.

A benign mole is symmetrical with smooth borders and consistent coloring.

This form of skin cancer can be especially fast-growing. It usually starts as a raised area.

Skin Tags Vs. Moles-How to Tell the Difference 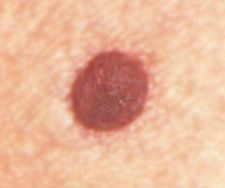 How to Spot Skin Cancer

Is It a Mole...or Skin Cancer?

Skin Cancer and Pregnancy: What Every Woman Should Know 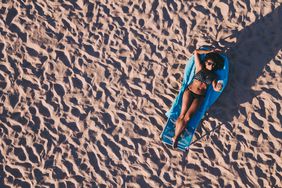 What Does Melanoma Look Like? 5 Skin Cancer Signs to Watch For

This Viral Photo of a Man's 16-Inch Melanoma Scar Proves Skin Cancer Has Lasting Effects
Sunburned Lips: The Best Ways to Soothe and Heal Them, According to Dermatologists
Newsletter Sign Up
Newsletter Sign Up