9 Sleep Apnea Symptoms You Need to Know, According to Experts

Waking up exhausted every day is definitely a sign—but it's not the only one.

If you're suffering from disrupted sleep, narrowing down what's causing it can feel like an overwhelming task— everything from stress to overactive bladder can make it difficult to get the right amount of shuteye. But the likeliest reason—one that affects an estimated 22 million Americans, according to the American Sleep Apnea Association—is sleep apnea.

While the telltale symptom of sleep apnea is waking up repeatedly throughout the night, a number of other symptoms can show up with the sleep disorder. Health spoke to sleep specialists to find out what to know about sleep apnea and the symptoms that come along with it.

What is sleep apnea?

Sleep apnea is a sleep disorder of abnormal breathing patterns while a person sleeps. It can happen when your tongue obstructs your airway while you're asleep, James Rowley, MD, a professor of internal medicine and chief of the Division of Pulmonary, Critical Care, and Sleep Medicine at Wayne State University, tells Health. "Sleep apnea is a condition in which the upper part of the airway behind the tongue collapses at nighttime," Dr. Rowley says. "That leads to multiple awakenings during the night." Dr. Rowley adds that this can lead to decreased oxygen levels at night, as well.

9 Things You Need to Know About Sleep Apnea

According to the National Heart, Lung, and Blood Institute (NHLBI), the following are the most common signs and symptoms of sleep apnea:

While patients suffering from sleep apnea will usually complain of waking up repeatedly during the night, they won't necessarily report experiencing difficulty breathing or gasping for air, Daniel Barone, MD, sleep expert at Weill Cornell Medicine and NewYork-Presbyterian and author of Let's Talk about Sleep: A Guide to Understanding and Improving Your Slumber, tells Health. In fact, a common complaint of people suffering from sleep apnea who haven't yet been diagnosed is, "I wake up many times throughout the night and I don't know why," Dr. Barone says.

However, often times the bed partner will notice that the patient seems to have difficulty breathing while they're asleep, Dr. Rowley explains. The snoring caused by sleep apnea can also be severe enough to disrupt the bed partner, or even people sleeping in other beds in the same home, Dr. Rowley says.

The symptoms caused by sleep apnea in children can mirror those in adults, but they can also show up in more discreet ways, per the NHLBI, including:

When should you see a doctor about sleep apnea?

If a sleep specialist suspects that you're suffering from the condition, you'll likely be asked to do a sleep study, Dr. Rowley says. This might be done in a lab, which essentially entails you being monitored while spending the night in a medical building, or you might do the study at home using a device to measure your breathing (the type of test administered usually depends on your health insurance). The results of this test will help doctors determine whether or not you're suffering from sleep apnea, Dr. Rowley says.

The good news is that a number of treatments can help sleep apnea patients. Different devices can help you rest easier if you have sleep apnea, chief among them the continuous positive airway pressure (CPAP) machine. "It's basically a device you'd wear over your nose that prevents the collapse of the airway during the night," Dr. Rowley says. "[The CPAP machine] is the most studied and most effective therapy for sleep apnea," he adds.

Other treatment options include a dental device worn during the night, which pulls your lower jaw forward just a couple of millimeters, Dr. Barone explains. This serves to pull the tongue away from the back of the throat, he adds.

Lastly, surgical options are becoming more popular, Dr. Barone says, explaining that some patients opt for an implantable nerve stimulator inserted in their chest wall. The stimulator is connected to the nerve that controls the patient's tongue, and what it does to treat sleep apnea is it "stiffens up the tongue," Dr. Barone explains.

If a patient is suffering from sleep apnea because they are obese, there's a chance their condition will clear up if they lose weight. However, "it's possible, but it doesn't happen as much as we'd like," Dr. Rowley says. But other lifestyle habits might help patients with sleep apnea manage the condition. Among these is avoiding alcohol close to bedtime since alcohol can be disruptive to sleep and make the muscles relax even more, which might make the tongue more likely to fall backwards and block the airway, Dr. Barone says. He adds that it might also be helpful to sleep on your side if you suffer from sleep apnea, since this too can affect whether or not the tongue obstructs the airway. 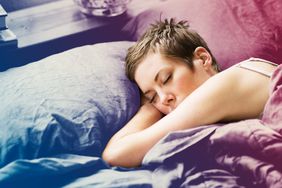